The term sprawl is too vague for applied policy work. As we discovered previously, there are different degrees of sprawl. We recommend that it is better to consider the traditional neighborhood as the benchmark for local policy. Then we can compare how a community differs from that standard. In our work, Axianomics is focusing on the qualities that make a neighborhood traditional. These qualities can me measured, but this kind of careful, detailed measurement at the neighborhood level has seldom been completed. As a reminder, a traditional neighborhood is the basic form for U.S. cities up until about the 1920’s. Communities didn’t build a lot during the Great Depression and WWII. After the war, however, the vast majority of new development departed from these following characteristics of traditional neighborhoods:

While such a neighborhood can have a high density of buildings per acre, density is only a potential result of these qualities. Build a neighborhood the traditional way and you can reap some of the efficiency benefits of density. In fact, density without these qualities is a recipe for congestion and a low quality of life experience. These four qualities permit a relatively dense neighborhood that is pleasant and that offers privacy and open space to those who want single-family living.

It might be helpful to identify the opposite qualities of a traditional neighborhood. A neighborhood with the following qualities will have a more difficult time delivering the efficiency benefits of density while also producing a high quality of life for residents: 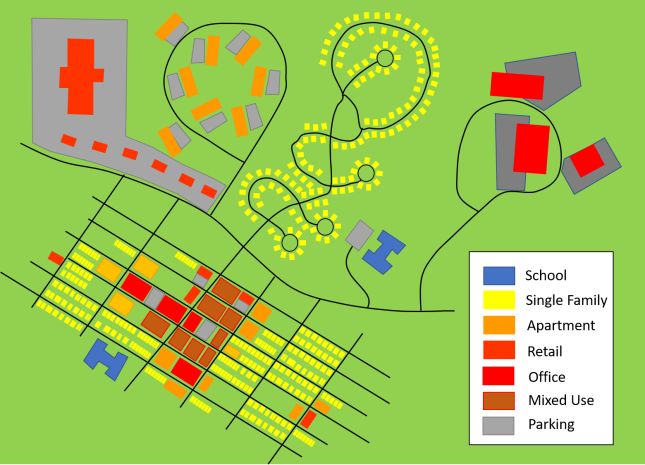 Moving from left to right, the top community has five separate zones: a large shopping center with several pad sites, a garden apartment complex, a single-family home subdivision, a school, and a low-rise business park.

The community on the bottom is centered on a cluster of mixed and single-use commercial buildings that accommodate retail, office and sometimes apartments. Structured parking serves car travelers to this district. Small apartment buildings surround the neighborhood commercial core. None of these buildings are over two stories. Single-family homes cover most of the community. These homes include row houses near the larger buildings, and a mix of small townhouses, duplexes and larger houses. The school is integrated into the neighborhood.

The bottom community probably supports a slightly larger population and job base, but on less than half the land of the non-traditional community. It takes very careful analysis to accurately assess the costs and benefits of these two neighborhood types. Next week we till turn to the available research, keeping these neighborhood qualities in mind.